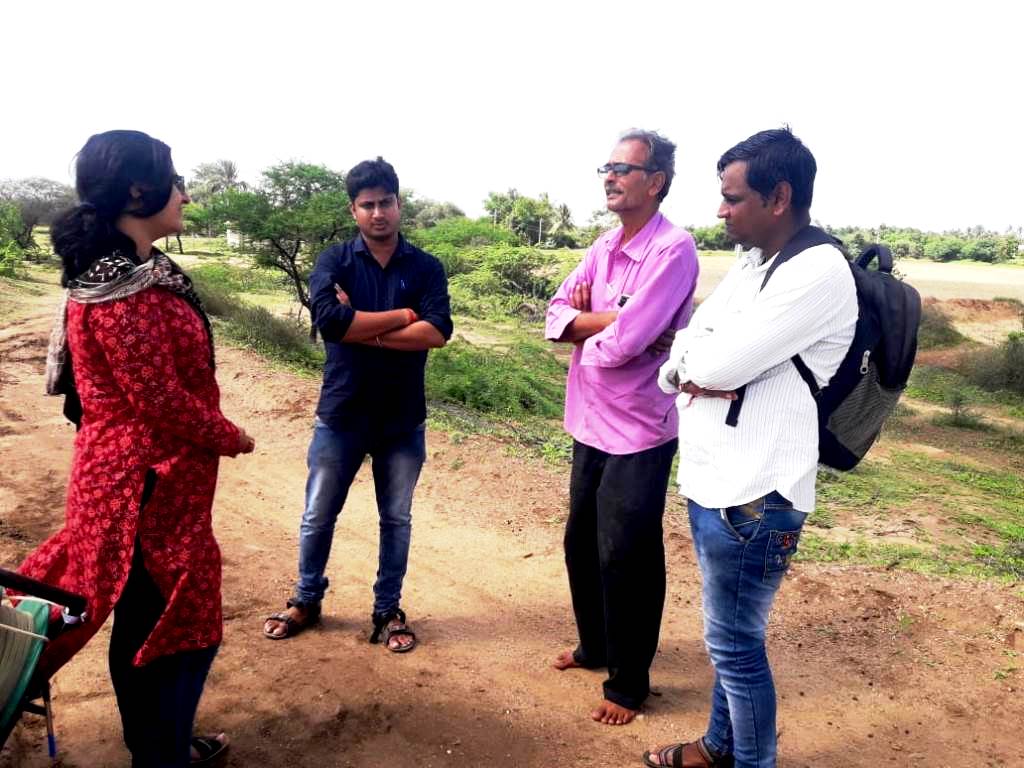 The project is being implemented in two different scaled areas; (01) Kankavati sandstone aquifer spread area along the coastal track and (02) Intensive program demonstration in Cluster of villages of Munda-Mandvi block. Kankavati sandstone is a coastal aquifer speaded over 4000 km2 area covering 04 coastal blocks. The aquifer fulfills water requirements of drinking, domestic and agriculture for 350 villages. The region has large scale industrial development. Due to regional level common resource, the aquifer is under stress of water table depletion. As the aquifer located on coast, groundwater has been deteriorated due to sea water salinity. Therefore, on regional scale, awareness, advocacy and groundwater monitoring is being carried out. While entire PGWM concept has been implemented in cluster of 19 villages of Mandvi block. The project is named as K-MARC (Kankavati Managed Aquifer Recharge through Community).The K-MARC project has 05 components such as (i) geohydrology and action research; (ii) water security plan, (iii) monitoring and data collection; (iv) field research lab and (v) awareness and advocacy.

All the cluster villages have been analyzed for socio-economic categorization. The categorization has been done with the aim to select model village and true beneficiaries in term of economic and social backwardness status. The villages have been evaluated for various parameters as potential natural resource, status of groundwater, village institution and attitude, livelihood and social set up. Based on these, 03 villages have been identified as model village, namely Moti Khakhar, Mota Bhadiya and Gundiyali. A further focus is being given on these villages to set them as model village. Village wise farmer group demonstrations will be set to demonstrate agricultural practices. Based on this, a group of 15 marginal and economically backward farmers has been identified in Mota Bhadiya village. The group is formed with aim to demonstrate all the PGWM protocols and activities in the cluster. Focus has also been given on women’s participation throughout the processes. 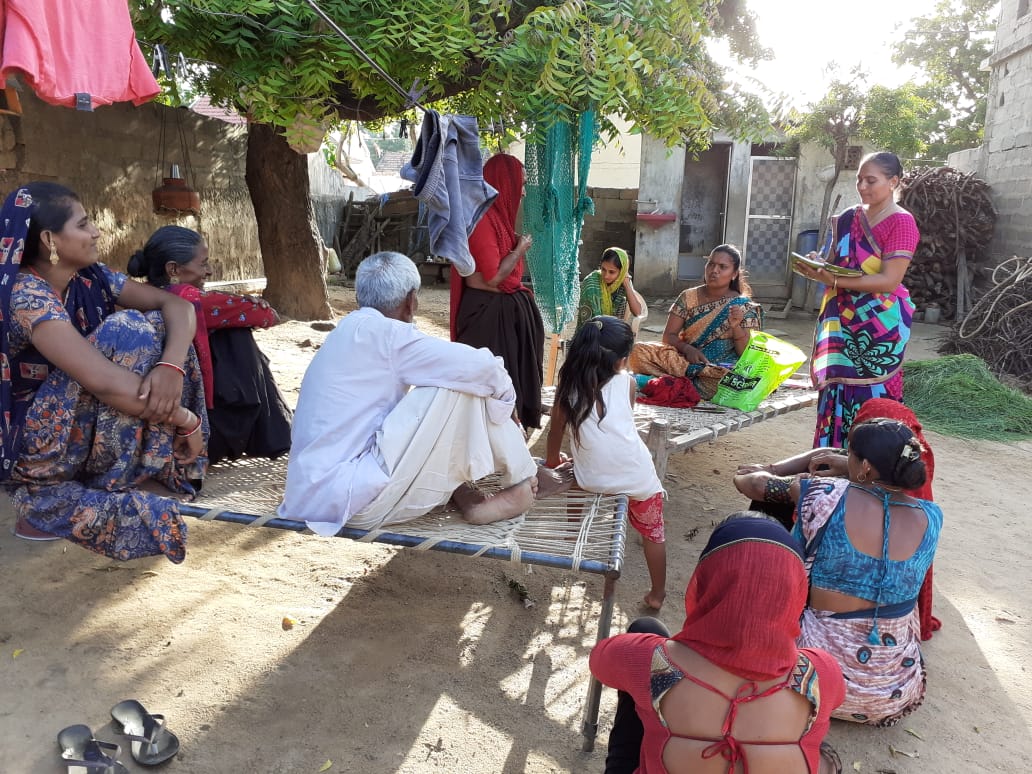 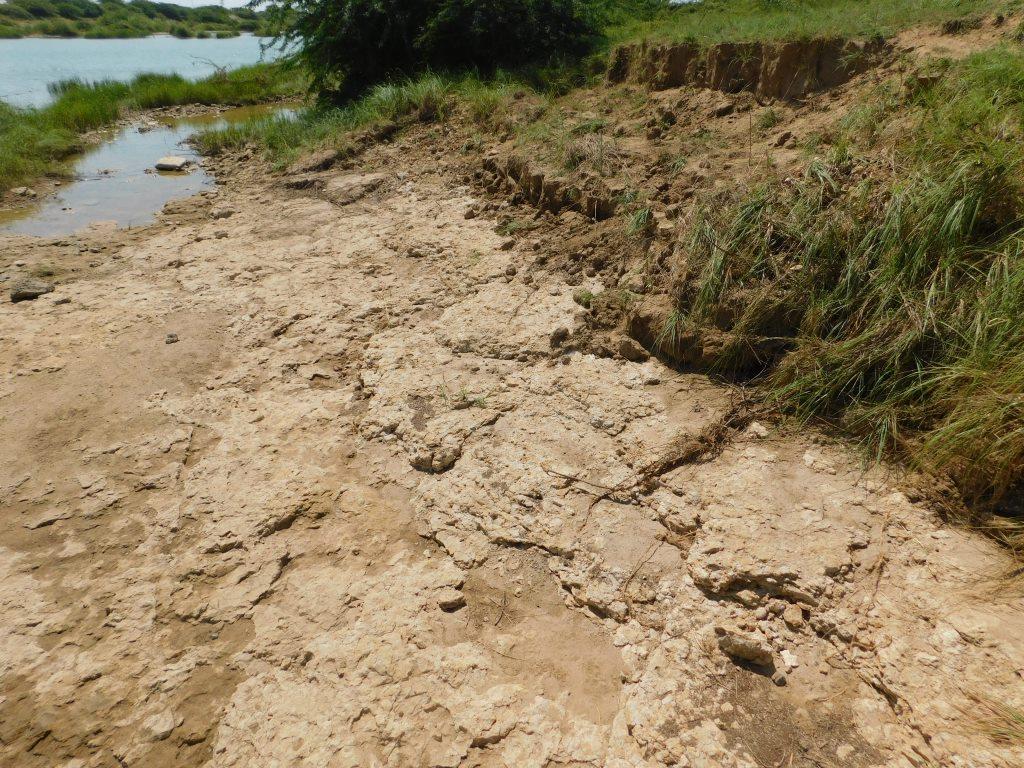 The crucial part of the program is  geo-hydrological characteristics, that  has been studied such as drainage network, watershed, surface geology, aquifer profile. The project area falls in the regional spread of Kankavati sandstone of Pliocene age of Tertiary. The aquifer is trending W-E from Abadasa to Anjar covering about 4000 km2 area. the formation is fluvial marine origin nature deposited over Laterites and Deccan Trap Basalt. In coastal track, Kankavati sandstone is overlaid by Recent Age Alluvium deposited by flowing rivers from the area. The thickness of Kankavati sandstone varies from 140m to 90m below ground level. The sandstone is embedded with clay bands, but due to its discontinuous nature, the aquifer is unconfined in nature. However, Clay lenses obstruct downward percolation of water along to its extent. Based on the slope characteristics, total 13 micro to major watersheds have been delineated. Considering 440 mm average annual rainfall, total rainfall received by the region is about 345 MCM. Considering slope and land use pattern, estimated runoff water is 157 MCM, 45% of the total received rainfall. Remaining water includes harvested water in surface water sources, evaporation loss, soil moisture, etc. 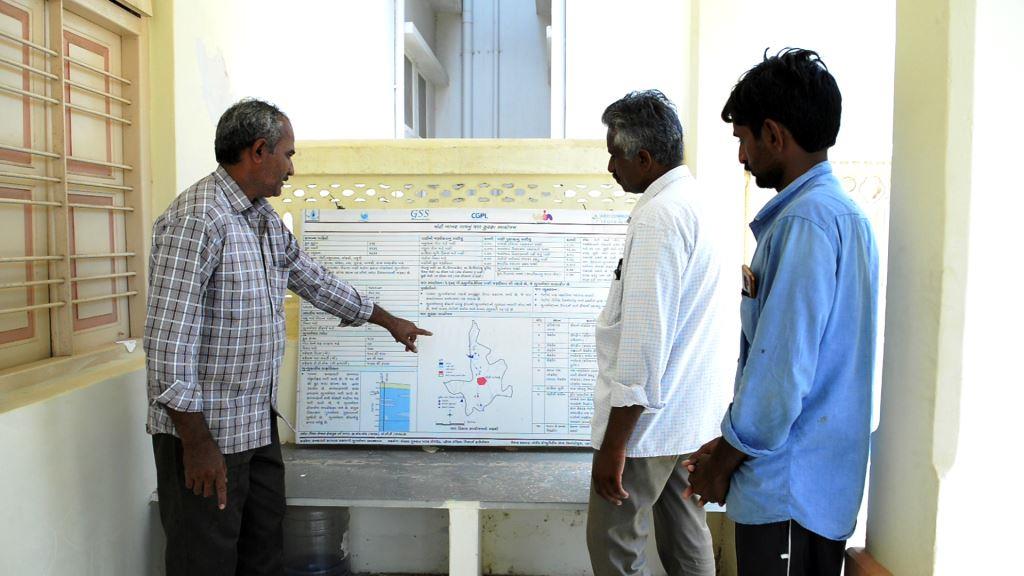 WSP has been developed for each village of the cluster with aim to make water secure village. The plan has been developed considering all the water demand, existing source assessment, groundwater potential and its changing trend. The plan provide guideline to match the demand by holding various demand and supply-side management activities through developing sources, augmenting, and efficient water utilization of water. Based on demand supply estimation, total deficit of the entire cluster is 31.29 MCM. With the support of WIN foundation and CGPL CSR, implementation work was done at 110 sites for groundwater recharge. This includes artificial recharge borewell (07 Nos), structure upgradation (05), salinity prevention filter well (02), existing well recharge (94) and roof rainwater harvesting (02). Total water harvested and recharged is 3,54,235 cum. Along with this, the management protocols have been developed for demand management, supply management and social protocols. Demand management protocol deals with water usage like farm-level interventions, changes in practices, reuse and recycle water. The supply-side protocol focuses on groundwater recharge augmentation. The social protocol is to set the village level institution to observe and monitor the implementation of other protocols.

It is a long-term process to standardize and validate the hypothesis as well as to convert findings into techniques and technologies. The action research is carried out in the project area for varied objectives for (i) Water use efficiency study of an irrigation dam for Faradi dam; (ii) Groundwater recharge through the surface spread; (iii)  Groundwater recharge through injection method; (iv) River bed recharge pit for Salinity prevention, (v) Defunct borewell recharge and (vi) Demand management through crop pattern, soil health up-gradation, micronutrient.
Water use efficiency study of an irrigation dam is focused on total water resource estimation and command area redesigned by consumptive use of surface and groundwater The action research on groundwater recharge activity include grid based well monitoring surrounding of recharge site such as pond, check dam and recharge borewell. Artificial recharge borewell has been constructed to recharge deeper aquifer. The research also focused on comparison of surface recharge artificial recharge technology.  Beside this, demand side management activities implemented at farm level such as soil amendment, promotion of low water consumptive crop, fodder base crop, soil moisture conservation, organic manure. The demonstrated activity will be monitored through soil health, water consumption and crop production. 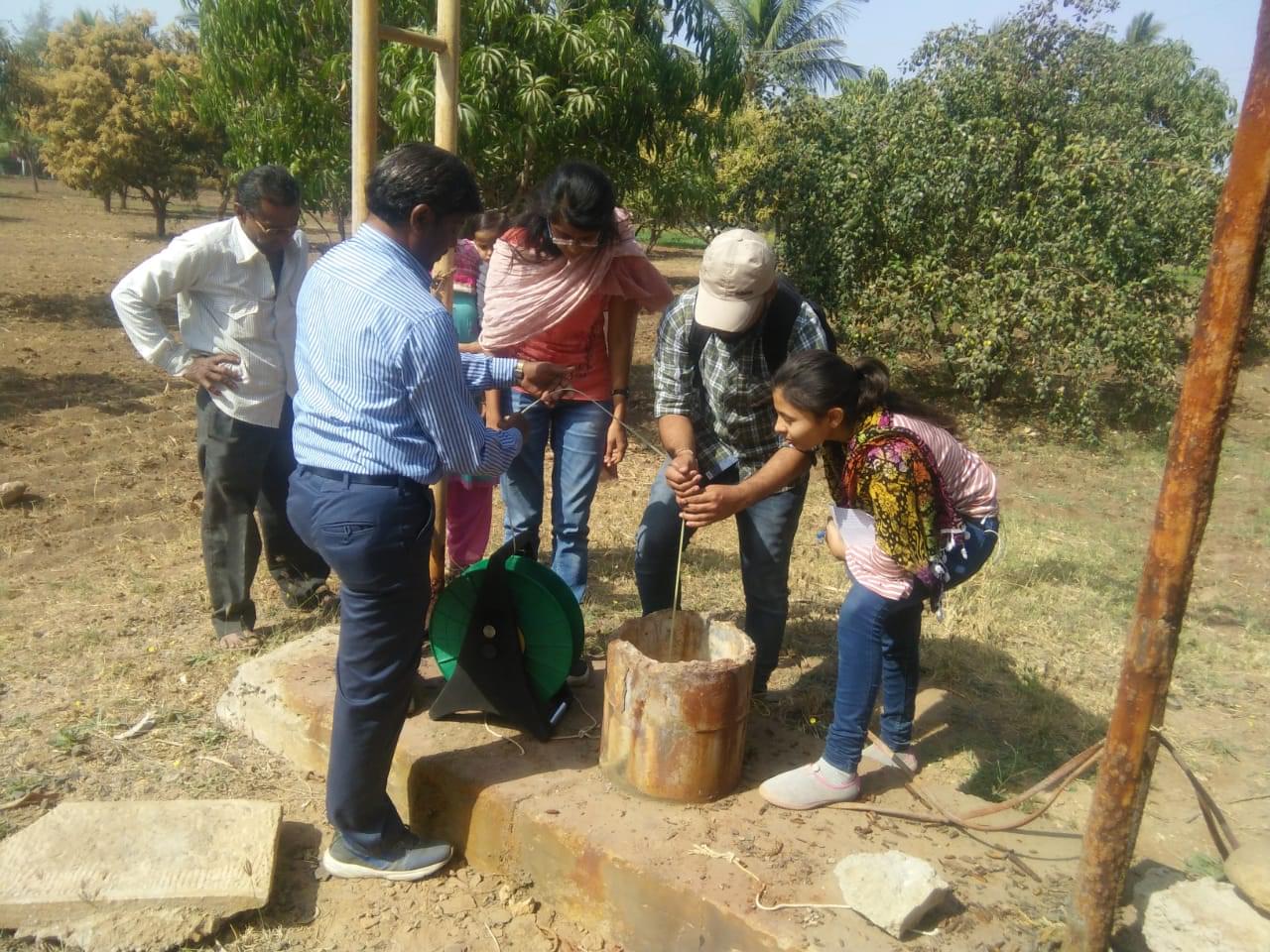 It is a key part of the program as the resource is a dynamic and get change by recharge and discharge. It is essential to monitor resource in terms of recharge, discharge and quality parameters, impact assessment with respect to interventions made, agriculture practice level monitoring and weather monitoring. The monitoring has been carried out in a participatory manner. Changing trend in groundwater regime will be the base for strategy framework, protocol development and institution strengthening. Monitoring has been set for groundwater at cluster level and regional aquifer level along with cluster level rainfall observation. Cluster-level groundwater monitoring has been carried out for 78 borewells on the basis of bi-monthly period. While aquifer level, groundwater is being monitored through 500 observation wells in pre-monsoon and post-monsoon season.
Soil and water sample has been collected and analyzed from action research sites. 88% of the water samples have TDS above 2000 mg/l. Highly saline groundwater occurs in coastal villages. 60 % of water samples indicate sea water salinity in groundwater. The primary interpretation of soil samples indicates alkaline soil having a pH range from 6.4 to 9.
Looking to regional level groundwater scenario, the groundwater table varies from 15 meter to >100 meter below ground level. Shallow groundwater zones occur in western and eastern part of the aquifer where thickness of the aquifer is also shallow. Deeper level (>100 meter) observes in central part of Abadasa, north of Mandvi block and parts of Anjar block. These patches are considered as intensive agriculture pockets. Central part of the aquifer falls in Mandvi and Mundra blocks show comparatively deeper groundwater levels. While looking to water quality as total dissolved solids (TDS), maps shows overall moderate groundwater quality. Coastal villages show high salts in groundwater in compare to inland villages. 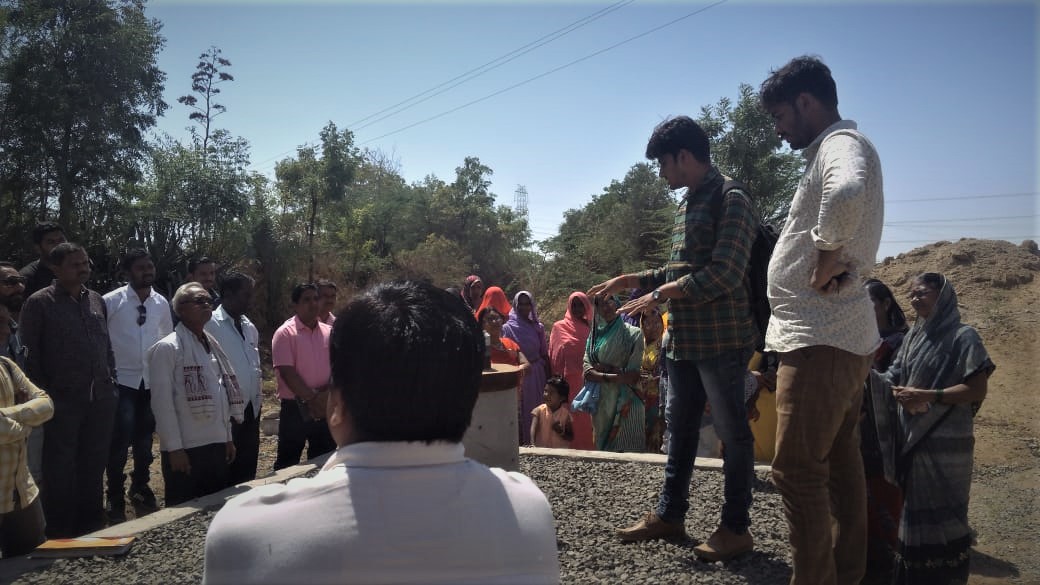 It ​has been designed for different level to create awareness, orient, and sensitize towards groundwater as common pool resource. The Bhujal Jankar cadre has been developed and engaged in the ongoing program activities. Training and capacity building has been designed for BJs for enhancing their technical expertise to act as a local resource person for community. This was the first step towards a community-centric groundwater management approach. Along with this, selected modules have been run for village panchayat and farmers group.
As groundwater is an integral requirement for all, it is required to demystifying knowledge through simplified tools for common understanding. As a part of PGWM program, it was proposed to set up a field research lab in the project area. The field research lab has been set at Bidada village. The field lab has been equipped with various instruments and material and regularly updated with database and required tools to transfer knowledge and experience to the community and other stakeholders.
Demonstration of participatory groundwater management program is path-breaking program for entire cluster, Kachchh region and other arid regions. Various events have been organized to aware the stakeholders like seminar, workshops, FGDs and print and electronic media.