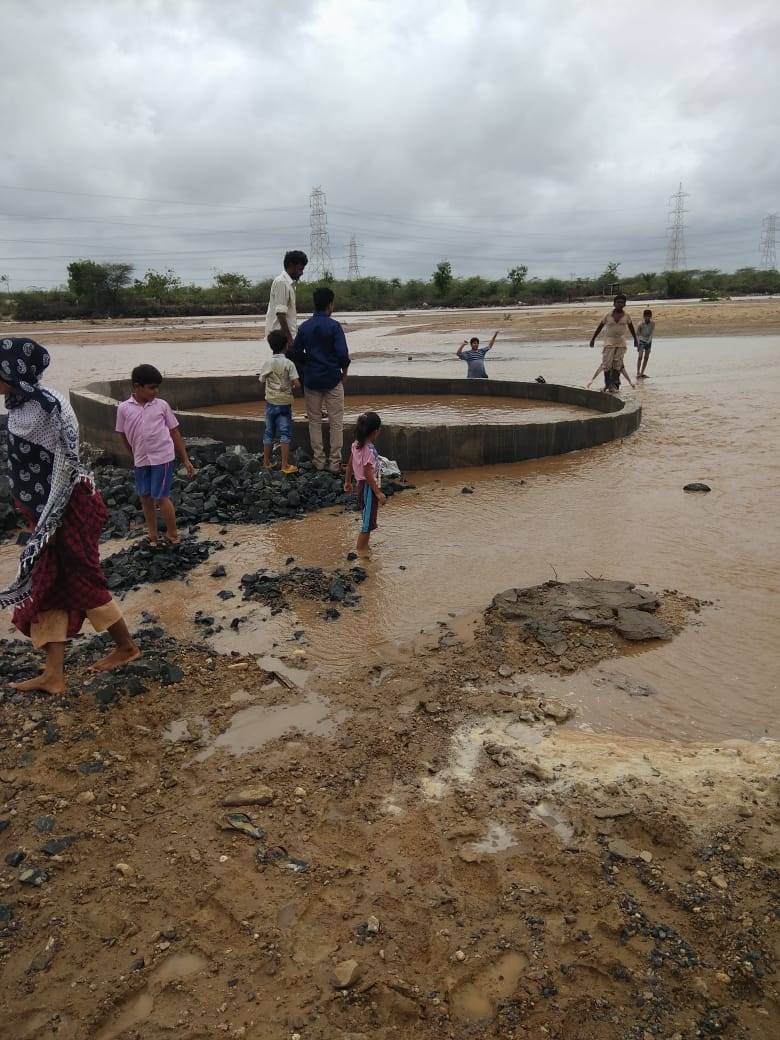 We are on a journey to make a difference...!

K-Marc stands for Kankavati Manage Aquifer Recharge through Communities. The K-MARC team consists of 12 members from different disciplines i.e. geology, engineers, social workers, agriculture from three partner organizations. Equally important in this team there are 08 farmer researchers whom we call Bhujal Jankars. The vision of the entire program is based on specific preamble on Participatory Ground Water management – PGWM, which has been rechristened  as K- MARC to create the resonance among the attached stakeholders in a very systematic manner to fulfil the demand and supply side augmentation of the region with standardization of the procedure, creating a robust implementation mechanism through infusion of technological incubation in the present practice to take this program to the next level of saturation which can cater the need of the community and attached stakeholders in sustained manner. The moto of this intervention to demonstrate how communities dependent on shared groundwater resource are addressing the deficit paradigm and vicious cycle which is existi​ng today viz. Knowledge and Information Deficit, Infrastructure Deficit, Institutional Deficit, Technological Deficit and Practice Deficit to an extent to 35 %.

Western most district, Kutch region is climatically characterized as arid region. The region has witnessed low rainfall and drought condition since long back. Major livelihoods depend on potential of water resources. Naturally the region is blessed with good potential aquifers which is the base resource to fulfill the demand. Share of groundwater in fulfilling all water demand is much higher than surface water resource. On other side, the resource is in stage of exploitation and sea water salinity intrusion. Groundwater management is only way to have water secure future. The important gaps to manage the groundwater resource are--Lack of aquifer science in management decision making.-Engaging community for managing groundwater at demand end.-Inefficient techniques and technological alternatives specific to location/aquifer.-Consideration of groundwater as common pool resource.-Integrated planning and collaboration.

The principal aim of the project is to demonstrate PGWM through developing the innovative technology and techniques and to set up project area as a field research laboratory on PGWM. The experiences of the same are disseminated through an institutional mechanism village level and aquifer level institution equipped with team of Bhujal Jankar. The aim has been achieved through various activities like action research, cluster level demand and supply management, field research lab, technology, innovation and institution building. Trans-disciplinary & integrated approach has been adopted to implement the project that include geo-hydrology, engineering, agriculture science, social science and policy advocacy.The main aim & objectives are-
To establish an aquifer management institutions equipped with groundwater management skills to become self dependent for their water demand.
-To built evidence on participatory groundwater management for ground water as a common pool resource.
-Include community participation at various levels incl. administrative units.
-Develop effective communication tools with communities for geo-hydrology science for advocacy.
-To develop a pool of groundwater knowledge holders (Bhujal Jankars).
-Advocacy to mainstream decentralized aquifer management approach for convergent actions and investments.

Participatory Groundwater Management is a lifelong process. During this project tenure, comprehensive concept of PGWM has been executed in the region that includes action, research, water security planning, groundwater recharge activity implementation, groundwater demand management, community mobilization, local knowledge center as research lab, Bhujal Jankar cadre and awareness, advocacy. Socio economic and base line has been done for each village. Total 30 sites has been set for action research agenda. Water security plan has been prepared for 19 villages and hand over to village panchayat. Groundwater monitoring has been set for 664 borewells along with 10 rain observatory. 05 farmer groups have been formed to demonstrate agriculture practices. As a part of capacity building and awareness, about 4000 people have been influenced directly.
Through implementation, 3,54,235 cum volume of water has been recharged to groundwater. Through conservation activities, 39,000 water has been conserved. The impact of intervention has been monitored that shows average 8 to 20 meter rise in water level while TDS values has been diluted with rate of 1500 to 2000 mg/l. the groundwater quality is improved as per drinking water potability.
Tangible and intangible impacts...
BJs are proving to be significant change agents and through their scientific measurement, understanding and communication in project village cluster and on aquifer. They are also an important interface between researchers and village communities.
Due to K-MARC project, there is significant information now available about the various community centric techniques for groundwater recharge, threat and potential areas within aquifer, groundwater quality, water levels in different part of aquifer for various type of use of groundwater including drinking purposes.
The initiated process of formation of male and female farmer groups and their collective decision-making processes for groundwater usages based on crop water budgeting is an evidence for other to move for self-reliance and sustainable groundwater management in cluster as well as in different part of aquifer and district.
As result of successful demonstrations of defunct bore well recharge, river bed recharge, NB 21, and use of deposited silts as soil amendments in farmlands many farmers groups such as Bidada Kadva Patidar Samaj, Kisan Sangh have started mobilizing their stake holders to adapt this technique and started implementations their own. Besides, the district administration has organized a training program for their technical program staff for inclusion of such practices in IWMP, MNERAGA programs.
So far water quality and water level depletion issues are concerned, the K-MARC interventions have made significant changes in water quality in many project villages that can easily see through reduction in TDS, especially in drinking water sources. The TDS concentrations has reduced by 500 to 3000 mg/lit while water level depletion has stopped in nearby recharge structures where farmers have raised their pumps by 6 mts. earlier they were lowering the pumps every year by 6-8 mts.